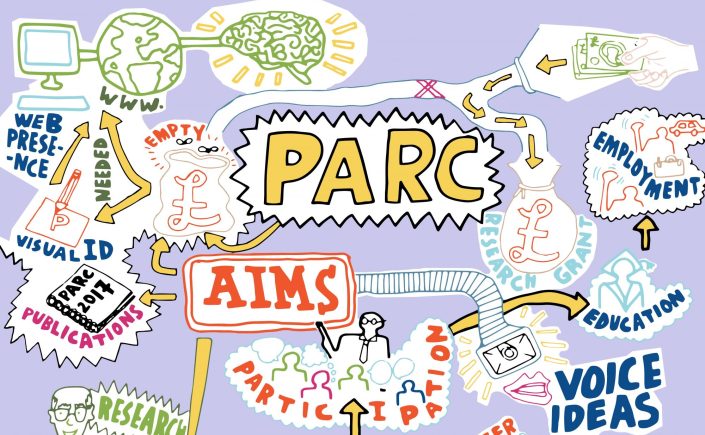 In this blog, three co-researchers write about their experiences of taking part in a participatory study on how the lived experience of self-identified autistic people can help young autistic people growing up.

Why do you think it is important for autistic people to be involved in research aims and design?

Co-researcher 1: Traditionally, researchers have approached the study of autism from their construction of what it is, by observing behaviour and making assumptions, with little or no understanding of autistic cognition or consideration of the social context. This has led to theories of autism which don’t match lived experience. These are often at best othering and at worst dehumanising. Similarly, many practitioners have professional expertise, but their distance from the day-to-day reality of what it is like to be autistic often leads to well meaning but misguided intervening where we’re measured against and forced into neuro-normative agendas. Participatory research is the lynchpin for repairing what has increasingly become a ‘them and us’ narrative, for improving attitudes and understanding of autism, and enabling more relevant support for us. I see it as a powerful process for bridging the double empathy gap.

Co-researcher 3: Because it will help to ensure that the research is suitable for autistic people

Being a co-researcher is quite a time commitment. What made you decide to participate?

Co-researcher 1: Initially I had misgivings about the time I need to set aside each week, but there hasn’t been pressure, for example, when I had other things going on and wasn’t able to complete the task for a few weeks, the researcher was completely understanding. The tasks are set at regular intervals and at the same time, and once you get into a routine it’s okay and I enjoy seeing how the project is unfolding. I’m motivated by the aims of the project and how it will hopefully help professionals to develop a better theory of autistic mind and provide better support.

Co-Researcher 2: I want to be a more active researcher in the field of autism. This seemed like a good opportunity to get involved with a team of other people.

Co-researcher 3: I am a good citizen.

What has the experience of co-researching been like for you?

Co-researcher 1: Enabling a group of us to have a voice where researchers and professionals haven’t quite got it right is quite liberating. In traditional research it feels like I’m just a provider of data for researchers to rubber-stamp their pre-conceived ideas. With the open-ended, exploratory nature of co-research, the project evolves around a framework but is driven by lived experience. Being listened to and having a voice is so important.

Co-researcher 2: It has been a good opportunity to make a difference. At times it has been hard to juggle people with different views and find a way for everyone to be heard. As it stands, I feel like I am co-researching with the lead researcher, and that they also have a team of other researchers, rather than working directly as part of a big team. For me, this is better, even though it is perhaps not how things were first envisaged.

Co-researcher 3: Have been a co researcher and researcher on other projects, interesting to do it from a specifically autistic perspective.

What is most helpful?

Co-researcher 1: Having an online platform has meant taking part so much easier. We give feedback each week on the tasks and I can do it when it suits me and at my pace. The connectedness with the co-research group, that we’re all working towards the same aim, I’m sure it helps self-identity. We may not communicate in the same way non-autistics do in a group but we get it done. The researcher leads the project but it doesn’t feel like there’s a hierarchy and we’re all in it together as equals. The sharing of commonalities with other autistic people is particularly empowering. I’ve learnt a lot from others who’ve raised things I hadn’t thought of.

Are there any drawbacks?

Co-researcher 1: There’s always a risk when taking part in any autism research that reflecting on experiences can be upsetting, particularly thinking about others not accepting our differences and bullying. At least in the group there’s a feeling you’re not alone and because of its on-going nature, support is around if you need it. If one of us has been upset we’ve rallied together and supported each other. I think its made us a stronger team. That level of shared understanding, specific to autistic experience, is not something I’ve encountered elsewhere apart from other autistic group situations.

Co-researcher 2: There have been times where there has been disagreements and difficulties and sometimes it had felt hard to feel heard when your views differed to those of other team members. Sometimes it is difficult to fit in commitments, time wise, or to keep up with everything that is going on, but this has been accommodated.

Have you benefitted from being involved in research design?

Co-researcher 2: It has been a good introduction to autism research, for me. Hopefully this is a first step and I will go on to do more work in the area.

How do you feel that the research project has benefitted from having autistic co-researchers?

Co-researcher 1: I think it’s influenced the design and inclusion criteria. There was a lot of attention to detail about how the study was communicated to participants when the project went live, by including things which are important to us and making sure the language isn’t ambiguous. Having a group of autistic co-researchers contributing to this has hopefully meant no stone was left unturned, and at least we’ve developed something to the best that we could.

Co-researcher 2: It has shaped the project, influences the evolving focus and ensured that work is accessible and acceptable.

What advice would you give to other autistic people considering taking part in research?

Co-researcher 1:
1. Look at the aims and decide if you think they will help autistic people.
2. Check how much input autistic people have had in the research aims and design, or if its building on other research of this nature. If it’s genuine participatory research, this should continue right through to the report write up.
3. Connect with universities where psychology departments seek to engage in authentic knowledge-exchange with the entire autistic community. Avoid those who do research ‘on’ autistic people or only engage with people who speak for them.
4. Think about taking part in focus groups and mentoring for autism research as well, but if you do, check all of the above. There’s a lot of tokenism about.

Co-researcher 2: Think about the time commitment. Make sure that you feel comfortable enough to say when things are or aren’t working for you. Realise that other people are likely to have passionate and opposing views and think carefully about whether you could manage that/ being in the centre of this.

Co-researcher 3: Same as to anyone – read the details carefully and make sure that you have the time to do it.

Project link: The project can be found at https://tinyurl.com/autismsurvey2019

One thought on “Is participatory research the answer to bridging the double empathy gap?”